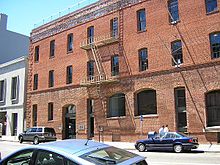 The company's head office is in San Francisco, with additional offices in Boston, Seattle, Virginia and Davis, California. Its offices in Mountain View, California, Brighton], Singapore and Amsterdam were closed in 2010. In addition, the company employs remote workers that communicate and collaborate on projects using Second Life technology.

The company, founded in 1999, employs numerous established high-tech veterans, including former executives from Electronic Arts, eBay, Disney, Adobe Systems, and Apple. The company's founder and original CEO is Philip Rosedale, a former CTO of RealNetworks, one of Time Magazine's 100 Most Influential People in The World in 2007.

In 2008, the company was awarded an Emmy for Second Life in the user-generated content and game modification category. The award was given at the 59th annual Technology & Engineering Emmy Awards. chairman of Linden Lab, accepted the award.

Although Linden Lab's Second Life platform was not the first online virtual world, it has gained a large amount of attention due to its expanding user base and unique policy that allows participants to own the intellectual property rights to the in-world content they create. The company's name comes from Linden Street, where the company was originally based. The company's transition from scrappy upstart to success is detailed in the book The Making of Second Life written by former employee Wagner James Au.

Although many people have assumed that the inspiration for Second Life originated from Rosedale's exposure to Neil Stephenson's novel Snow Crash, he has suggested that his vision of virtual worlds predates that book and that he conducted some early virtual world experiments during his college years at the University of California San Diego, where he studied physics.

Rosedale's strong coding skills eventually resulted in the creation of a video compression technology that would later be acquired by RealNetworks, where he was made CTO at the age of 27. While at RealNetworks, Rosedale's ambition to create a virtual world was resurrected and recharged by technological advances in computing and his attendance at the popular music and arts festival Burning Man.

With the help of a financial windfall that he reaped from his time at RealNetworks, Rosedale formed Linden Lab in 1999. His initial focus was on the development of hardware that would enable computer users to be fully immersed in a 360 degree virtual reality experience. In its earliest form, the company struggled to produce a commercial version of "The Rig," which was realized in prototype form as a clunky steel contraption with several computer monitors that users could wear on their shoulders. That vision soon morphed into the software-based application Linden World, where computer users could participate in task-based games and socialization in a 3D online environment. That effort would eventually transform into the better-known, user-centered Second Life.

During a 2001 meeting with investors, Rosedale noticed that the participants were particularly responsive to the collaborative, creative potential of Second Life. As a result, the initial objective-driven, gaming focus of Second Life was shifted to a more user-created, community-driven experience.<

Rod Humble, appointed CEO in December 2010, announced his departure on Facebook on 24 January 2014, stating that he would be leaving Linden Lab to pursue founding a new company that will "make art, entertainment and unusual things!".

In February 2014, Linden Lab announced that its new CEO was Ebbe Altberg, former COO of BranchOut.

In June 2014, Linden Lab confirmed that they plan to build a new virtual world.

As of August 2015, Linden Lab are in beta tests of Project Sansar.

Linden Lab has elicited both compliments and curiosity for its unconventional corporate culture, which is based on a non-hierarchical system where employees are unusually self-directed and transparent in their work. The company makes a strong effort to maintain transparency among its employees and to the general public.[citation needed]

Linden Lab utilizes another internal tool, the Distributor, that enables all employees to distribute "points" to projects that they deem to be worthy of development and resource support. Each point has a financial value that is based on each quarter's financial performance. As a result, key stakeholders in the projects with high point values receive a distributed monetary payoff at the end of the quarter for successfully completed projects. The Distributor was discontinued after Rosedale left the company.

In addition, each employee's quarterly performance review is published on a Wikipedia-like internal website that all other employees may see.

Employees of Linden Lab, who are easily identifiable in-world by their Avatars' last name "Linden", have been known to participate in several collaborative events with Second Life users. For example, the company holds an annual holiday "snowball fight" where users are encouraged to throw virtual snowballs at Linden Lab employees.

On January 20, 2009, Linden Lab acquired XstreetSL (formerly known as SLExchange) and OnRez, two web-based marketplaces for Second Life virtual goods. It subsequently closed OnRez and merged XstreetSL with the secondlife.com website, closing its currency exchange service and web forum. On September 10, 2008, the owner of SLExchange renamed the website under threat of Linden Lab enforcing a trademark on the letters "SL". XStreetSL was replaced in late 2010 with the new SecondLife Marketplace.

On June 9, 2010, Linden Lab announced a restructuring plan including a 30% reduction in workforce. The plan articulated a new renewed focus on development of browser-based 3D viewer for the Second Life Virtual World. CEO Mark D. Kingdon, aka "M Linden", stepped down and was replaced by founding CEO Philip Rosedale.

It was announced in November 5, 2014 that the Desura distribution service was sold by Linden Lab to Bad Juju Games.

In 2006, Pennsylvania lawyer Marc Bragg (“Marc Woebegone” in Second Life) brought a lawsuit against Second Life developer Linden Lab when his account was disabled by Second Life administrators. The case was eventually settled out of court.